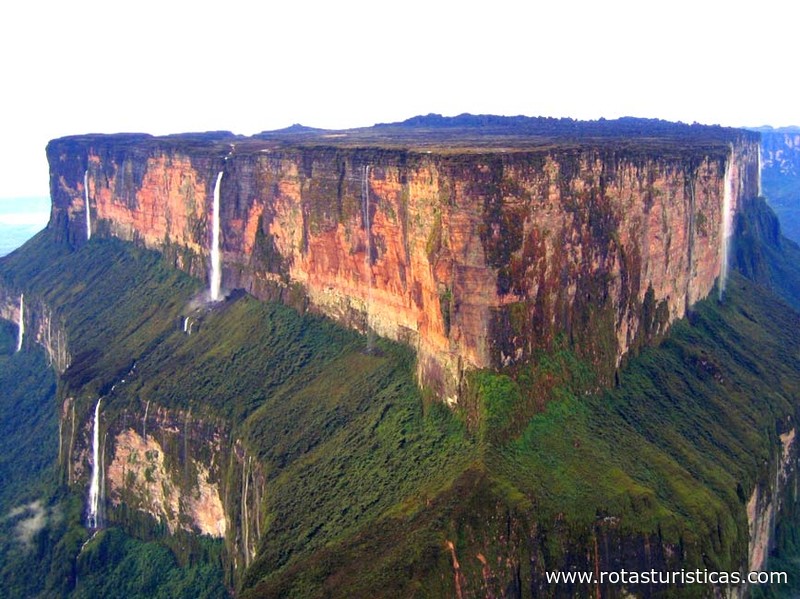 The Angel Falls is the highest waterfall in the world, with 979 meters of height (807 meters of continuous fall), generated by the fall of the Churún river from the Auyantepui, in Bolivar State, southeastern Venezuela, near the Brazilian border -Guiana. His name is allusive to the American aviator James Crawford Angel.

The jump is part of Canaima National Park, established in 1962 and declared a World Heritage Site by UNESCO in 1994. It is an area of ​​30,000 km², being the sixth largest park in the world.

Official height was determined by a National Geographic Society survey in 1949, according to Ruth Robertson in Jungle Journey to the World's Highest Waterfall. David Mott's book, Angels Four, reports the first successful climb up the face of Auyantepui, the mountain of evil, to the top of the falls.

The jump was known to the Indians of the area, who called it Kerepakupai-meru ("waterfall to the deepest place"), in the Pemon language, but their "discovery" by the Westerners is a controversial subject. Some historians attribute it to Ernesto Sánchez, an explorer who in 1910 notified the finding to the Ministry of Mines and Hydrocarbons in Caracas. Others mention Captain Felix Cardona Puig, who in 1927, next to Mundó Freixas, spotted the great jump in the massif of Auyantepuy.

The articles and maps of Venezuela attracted the curiosity and adventure spirit of aviator Angel. On May 21, 1937, Cardona accompanied Jimmy Angel in the fly over jump. In September of the same year, Jimmy Angel insists on landing on the Auyantepuy, which he abruptly gets, embedding his small plane in the ground. The news of the accident, without victims, motivated that the great jump was baptized like Angel Falls.

The Angel Falls are also known erroneously as Churún-merú, name that corresponds to another jump of about 400 meters of height located at the end of the Canyon of the Diablo, that occupies the fourth place world-wide.

In Canaima, Santa Elena de Uairén and Ciudad Bolívar there are tour operators that promote excursions by land, water and air (by airplane or helicopter) to see the Auyantepuy and its numerous waterfalls.
Comments

We don´t have yet any comments about:
Angel Falls
Be the first to leave a comment as it is very important to inform other people

Suggest Place to Visit
Outros locais a visitar
Within a radius of 20 km from:
Angel Falls
Unfortunately we do not have information on other places to visit in this area yet

Hotel reservation near Angel Falls within a radius of 20 km

Research which route you want to comment or rate, or even consult

Add photos to the tours

Add photos to the Transfers

Join. Add places of interest to be visited

Participate, let others to known the restaurants you recommend